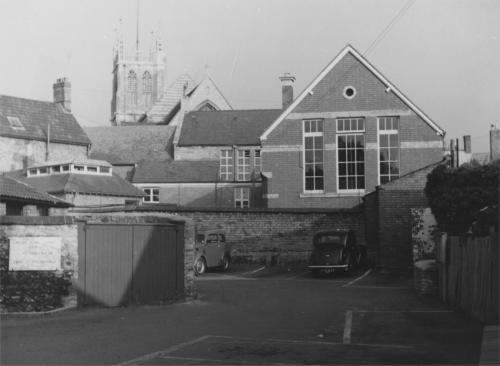 The image is Dursley infants school where Beeston may have attended as he does not  mention the name of the school, that he started in the infants class, or he may have attended Stouts hill preparatory school (where Stephen Fry also attended). The start of Beeston’s writing talks a lot about Beeston’s school life, from starting school age three, to leaving school to go to work age thirteen.

For such early memories, they are strong in Beeston’s mind, as he can recall early events, from his teacher’s names, Mrs. Cox, Miss Emily Bloodworth ,Mr. Ben Prior and his wife Mary. He writing is very nostalgic  when he is explaining his brief school days. He talks about the sets they had in school, where he joined age three in the infant class, and gradually went up to the standards and then the upper standards. This is interesting as he can name his teachers yet does not name his parents.

Beeston reminisces about being caned at school but when his teacher Ben Prior went to get the cane,  Beeston ran away from school and went home, where his mother dragged him back and he was caned. This shows how typical schooling was in those days. He also remembers  Bobby Collet, the school attendance officer who threatened Beeston with reformatory school, as Beeston was fond of bunking off school. It was only his father being away in France that stopped him being sent away. This would have been commonplace around the time Beeston attended school. Also caning was so common that Beeston did not seem too worried about the fact he would be caned when he bunked off .

Beeston handwrote his autobiography, yet for someone who left school age thirteen to work in a saw mill, he has beautiful handwriting and excellent grammar and spelling, which shows us how efficient schooling was in those days, as he was not in school for long (ten years) compared to today’s standards. His handwriting is cursive, showing that emphasis on writing was important in those days.

Beeston writes  eloquently, as he was an educated man despite leaving school very young, which is more remarkable as he attended a tiny village school which would have had very few pupils and only a handful of teachers.

Even during World war one the school still taught, even making ten plots in the gardens for the children to grow vegetables in, but only the upper standards. Beeston himself was not involved in this, but he remembered that this was an important event during his time at school.

Beeston, Reg, ‘Some of my memories of and about Uley until about 1930, Brunel University Library, vol  no. 2:56