Reg Beeston was born in Stitchcombe in 1905 but moved to the small village of Uley aged two. It is Uley that Beeston most identified with as a community  he called home. Unlike other working class authors autobiographies, Beeston’s is less about the pain and hardship suffered, especially during the first world war, and more about how homely it was being a part of the old fashioned village life.

In his handwritten memoirs, ‘Some of my memories of and about Uley until about 1930′, Beeston puts a positive spin on life in his village, even turning events as horrific as murder into something the villagers saw as gossip and excitement. His memories of Uley life span about twenty five years, from him moving there as a two year old child in 1907 until 1930.

There are many themes in Beeston’s writing, but little detail about himself or his home life, except for  a brief mention of his father being a cobbler. He talks about going to school from the tender age of three so that he was not always around his mother (presumably so that she could get work done without the toddler getting in the way.) He goes into a lot of detail about the sets that were at school, from the infant’s to the standards and upper standards. He even remembers some of his teachers, Mrs. Cox, Miss Emily Bloodworth and later, Ben Prior and his wife Mary. Beeston talks about how he would average at least one caning a day at school, to the point where he was involved in a playground fight and was told to stay after school the next day, but once his teacher, Ben left the classroom to fetch the cane, Beeston bunked off and went home instead! His mother brought him back and he was then caned over a desk. (These strangely are the only times he mentions his mother.)

Beeston’s accounts of a sleepy village are often interrupted by events of public interest. An example of this is the excitement he expresses when he mentions a lady in Uley brought a Gorilla named John Daniel to live. (Above is an image of John Daniel leaving Uley to go to America where he died shortly after, later being stuffed and displayed in the natural history museum.)The mention of the gorilla going into Beeston’s house to watch his father a cobbler work was a great memory for Beeston.  This as well as two murders and a suspected suicide were events that interested him.

Beeston does not go into great detail about World War One in his autobiography, which would have been a massive event for most people. It is likely that the War never affected Beeston (except that he does mention at the beginning that the school attendance officer, Bobby Collet threatened to send him away to reformatory school if his father was not in France.) He doesn’t tell us why his father was in France but we can assume it was in relation to the war. He also talks about his school having about ten plots of land to grow vegetables on. He also remembered that many horses were taken away from the village for the war effort. However as Beeston,  was not in a city he didn’t worry about bomb threats.

Beeston  left school aged thirteen and got a job in a saw mill until he was nineteen years old. There Beeston was a prankster and with his friends who had also left school, would constantly wind up the old man who worked with them, including digging a hole at old Mark’s work station then filling it up with pigswill and sawdust so that old Mark fell in it. This is just one example of Beeston and his friends’ high spirits. 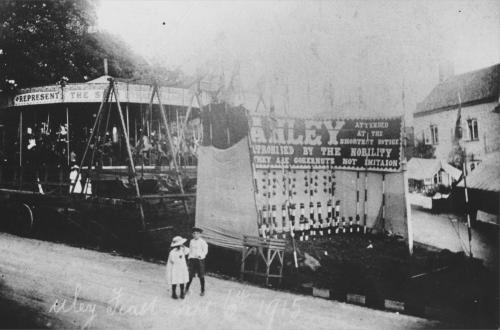 Uley feast plays a huge part of Beeston’s life. He described it as being such an exciting time where the whole community would get together. Community spirit played a huge part in Beeston’s life, more than any hardship. The Uley feast and fun fair was a big deal as he talks of the stalls that cost a penny or two pence per game. The feast and fair (held every September) was eventually stopped because of the war as it was feared the lights on the stalls would attract Zeppelins. This led to the whole village turning out banging pots and pans in protest, although it was futile and the feast was stopped for many years.

As a young man, Beeston’s only two options were the pubs (which he described as often being rowdy with the odd fight, but also a place for a sing song.) Or, the Reading rooms in which membership was six pence a year (Beeston became a member) where the young men could play billiards, and other games.

Beeston’s fond recollection of the village is evident throughout his writing, particularly when he lists all the shops on the high street that he can remember by heart and what sort of impact they had. An example is the newsagents where he was allowed a penny to buy sweets. This and the baker who he talked about batch cakes as “you had to live in those days to really know what bread tasted like.” (pg 17) The handwritten manuscript is conversational in his writing style, as he has literally written an account of what life was like, with him frequently interrupting his monologue because there was a person or a place he had forgotten about that he deemed important enough for people to know about.

Beeston, Reg, ‘Some of my memories of and about Uley until about 1930, Brunel University Library, vol no. 2:56