Margaret Perry was born to a working class family in 1922, the third of four children to her mother and father, ‘I loved my Father when I was a small child. And he loved his children, the youngest always being the favourite’ (pp. 1). Joanna Bourke argued that class status was determined by family background, 'men and women calling themselves working-class were drawing upon an identity based not only on their current position in society, but also on a position inherited from their parents and grandparents'(1). Perry begins her discussion of family from her paternal relatives, ‘My father … was the third of a family of ten children' (pp. 1), and maternal relatives, ‘both my maternal Grandparents died when my Mother was very young, her Father from alcoholic poisoning, and by all accounts, her Mother from hard work’ (pp. 4).

It is clear that Perry’s parents had traditional roles within their working class home, her father working, ‘he was Chief Engineer’ (pp. 2) and her mother remaining at home, ‘from early rising, she sang through her morning’s work till she sat down regularly at 2.p.m every day with her book … a short break to get the tea ready, she read through the evening till bedtime’ (pp. 9). Ann Oakley argued that the role of housewife in the nineteenth century was a 'demeaning one, consisting of monotonous, fragmented work which brought no financial remuneration, let alone any recognition'(2). It was suggested that a husband was '"good"' if he left his wife to her housework without inteference. Indeed, Perry says that her father 'never lifted a finger to do anything domestic ... he wouldn't even mow the lawns' (pp. 25). Nonetheless, acceptable domestic chores for working class males regarded 'do it yourself, repairs, redecorating'(3), and Perry's father did this,‘his hobby was “fiddling” with the old wireless sets though I don’t remember anything emitting from them except excruciating noises’ (pp. 3).

It appears that Perry’s mother was not quite adept at her housewifely role, ‘my Mother wasn’t the best of cooks’ and ‘she could not learn how to manage her housekeeping money’ (pp. 7), with this budget being integral to the role, 'the parlour was a confirmation of the housewife's pre-eminent role in the management of resources, and symbolised her success in budgeting a limited income'(4). However she did maintain a clean home, ‘she criticised my Mother’s house-keeping quite openly to me as wasteful and extravagant, and my mother described her in one word, "filthy"’ (pp. 16), which was also integral to the housewife role, 'housework was not "invisible" work; it was very visible - especially to other housewives who competed with each other and punished (through social ostracism and gossip) other housewives who were seen as lowering standards'(5). The impact, or rather, the lack of impact of consumerism upon the working class domestic household is also evident, 'a writer in the Daily Herald on 3rd February 1922 ... "delightful devices put on the market for easing kitchen labour ... As I say, excellent. But only the women who don't do their own washing can afford it'(6). 'Perry seems to suggest that her parents were not affectionate, ‘they did not use words like love, or kiss’ (pp. 5), and suggests that they were not well suited, ‘married to a different man, she could have been an intelligent and interesting woman’ (pp. 9), which implies that intellect depends on marriage. It is intriguing though that when their children had grown, Perry’s parents became closer, e.g. ‘Ask your Mum if she wants to go for a walk’ (pp. 23).

Dependents – Children, Lodgers, and the Vulnerable.

Forms of dependence are obvious in Perry’s working class family, outside of school age children. Perry’s mother, then a young, unmarried female, was forced to live with ‘a married brother’ after the death their own mother. Perry’s older sister Nora became pregnant at nineteen to her boyfriend, who lodged with them; after leaving the family home, she moved close to the family, handing over ‘her daughter and her ration books’ (pp. 23) when she worked. Conflict over finances could arise in the working class family with this, 'wages may be skimmed before reaching the communal purse'(7), and Perry’s father would never visit his own parents unless he could ‘take them some money’ (pp. 1), revealing the role of sons once they had left home, and the meagre pensions the elderly received, 'the elderly have always experienced the highest levels of destitution'(pp.6). Perry’s uncle gave up work to care for the elderly couple, ‘his aged mother had an ulcerated leg since a bad fall on her 21st birthday’ (pp. 2), showing that dependents were not always children in the working class family.

Religion is not mentioned much in Perry’s memoir, although a neighbour, ‘Auntie Maria’, took Perry to a spiritualist church of a Sunday, ‘my parents strongly disapproved of my going to these places, but they had no religion to offer themselves, so gave up protesting’ (pp. 16).It is clear that sexuality was not discussed in Perry’s family, from grandparents, ‘they were a highly moral lot whom one couldn’t imagine indulging in any sort of sex life whatsoever’ (pp. 1) to her own parents, ‘the whole question of sex was just not in my parents’ vocabulary’ (pp. 5). With this attitude, Perry was surprised that her parents had had sex before marriage, ‘the wedding anniversary came too close to my eldest sister’s birthday’ (pp. 5).

The pressures of a large family alongside poverty are obvious in Perry’s memoir. This is particularly clear in Perry’s mother’s attempts at an abortion, ‘she drank a lot of Gin apparently, soaked in hot baths, and “jumped off the copper top” … a recognised way of procuring an abortion at that time’, and ‘my birth was breech, nearly killed my mother … the damage to me had frightened her’ (all pp. 6). Infant mortality is also painfully evident in her working class family from her maternal grandparents, 'pregnant regularly once a year ... she was usually up and out to the fishmarket at 5.a.m within a couple of days of each birth, not many of these babies survived' (pp. 4). By the 1930s, levels of infant mortality had dropped from 125 out of every 1000 born in 1911 to just 62 out of every 1000 born (8). Witnessing the realities of working class child rearing ('the terrible poverty of customers, the barefoot ragged children and the reek of the urine soaked babies'), Perry's mother's maternal instincts were 'thwarted'. Ways of child-rearing are clear too, ranging from Perry's paternal grandfather, 'a stern Victorian, who believed as was the tradition that children should be seen and not heard' (pp. 1), to her mother, 'she spent more than her neighbours ... we always had new shoes' (pp. 7). It is intriguing that despite Perry's gender, she was protected from housework by her mother; however, this could  actually be due to Bourke's explanation of the matter, 'women resisted sharing of subdividing power with other women as well. Some daughters were not allowed to do housework because the mother was "jealously clinging to power in every department of the house"'(9). 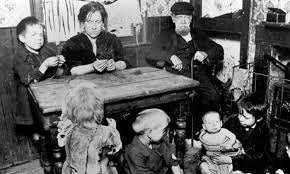 Perry’s family income improved during the 1930s, with the dependents now being of working age, ‘we could afford a better house in a nicer neighbourhood … a rented detached house with a garden … the joy of a bathroom’ (pp. 22). The home was made complete with ‘a Springer Spaniel’.  They moved house again the following year to a ‘”very desirable property”’, enjoying ‘new furniture and carpets’ (pp. 23). Nonetheless, Bourke argues, 'what we see in the twentieth century is that working-class individuals retained their self defined identity as working-class despite impressive improvements in their material well-being'(10), being fixed in their status despite better welfare (pp.5). On the other hand, it was argued that welfare improvements sparked an 'embourgeoisement'(11) of the working class.

At the age of twelve, when her elder sister moved house, Perry was sent to help her, being ‘thrilled that everyone thought me capable of being cook, housekeeper and nursemaid at that age’ (pp. 10). Like her mother, Perry married (in a ‘white wedding’) at the age of twenty. She spent most of her time ‘miserable … writing to friends at home and particularly my mother’ (pp. 31). Perry appears somewhat inept as a housewife ‘I couldn’t cook and queuing for awful food was making me bad tempered’ (pp. 31), and wanted to work, although she was only allowed to do ‘war work’ (pp. 32). Perry returned to live at home, ‘I was happy again and appreciated my home comforts like never before’ (pp. 32), with her husband providing ‘thirty shillings for my keep and a few shillings to me and I whiled away the summer sun-bathing and dancing' (pp. 32). This frivolity led to lovers and her husband could take no more infidelity ‘of mind and body’ and Perry’s mother had had ‘enough of the quarrels’ (pp. 38). The pair divorced soon after, with Perry remarrying in 1950. This is where she ends her memoir.

Thinking about looking into your own family history? http://www.bbc.co.uk/familyhistory/ this website is a good starting point!